We crossed the border into El Salvador and took the winding road down south along the coast. It was the first time I had been back on the Pacific coast since I was in San Diego two months ago.

We stopped in the beachside town of El Tunco for 2 nights, a popular surf beach with black sand and large rocks lining the shore. The small town had not much more than a handful of shops along with some restaurants and bars catering for the small but growing number of tourists now visiting not only here but El Salvador in general. Being back on the western coast meant great sunsets over the water once again and each afternoon we sat on the seawall watching as the warm colours painted the sky and reflected off the water. 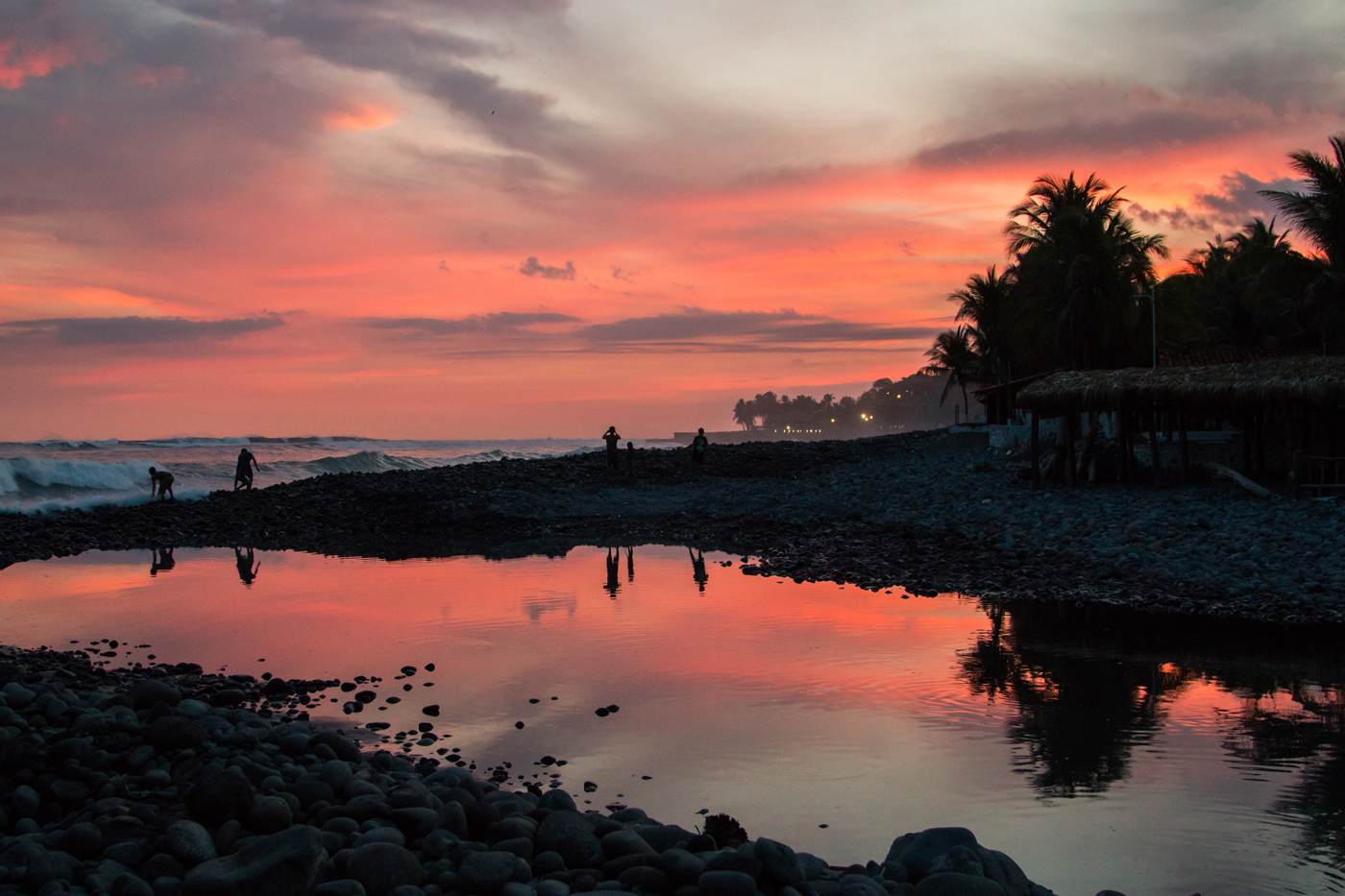 Pupusas are a traditional dish in El Salvador and as a result are found everywhere throughout the country. They consist of a handmade corn dough stuffed with a filling and patted into a thick tortilla before being cooked on a hot plate. Their prevalence meant they quickly became a cheap and easy breakfast, or even snack, for us on most days. We found vendors filling them with everything from cheese, pork, spinach, garlic, beans or mushrooms and typically selling for around 50c each.

As stupid as it sounds the most difficult of decisions we have these days now involve questions like “where should we go next?” and so after much longer than it should’ve taken we made the choice to see some more of the country. With most visitors typically continuing out of El Salvador after visiting the coast we found it tough to find either public transport or a private transfer to Santa Ana. Instead we settled for a taxi to take us the 2.5 hours inland.

Our hostel in Santa Ana was centrally located within the town and thanks to the friendly and helpful owner, Carlos, we had no trouble locating the many terminals for getting the local chicken buses around the area. The bus experience itself was unlike any other. Leaving from within the local market and moving along at crawling pace to get out onto the main roads meant there was ample chance for different vendors to board the moving bus at the front door and walk the aisle attempting to sell their goods to the passengers before jumping off at the back door. We had seen the basics like drinks, chips and fruit on other Central American buses before but this was in another league. One guy was even forward thinking enough to sell both coca-cola and toothpaste (but nothing else). Much to our amusement we took note of the items we saw for sale just on the one bus trip in the space of 10 minutes:

The highlight from Santa Ana was taking the buses along Ruta de Las Flores, a 40km winding road lined with wildflowers, jumping on and off at the small colonial towns along the way. Our first stop was Juayua and as soon as we left the bus it started to rain. As always we were not prepared and instead had to take shelter under shop awnings to keep dry. Disheartened by the weather we walked around town unsure of what to do before deciding to try and find a nearby waterfall we had read about. With help from our broken Spanish and a friendly local we found a tuk-tuk driver that would take us out of town along a dirt road and drop us at the top of the entrance path. 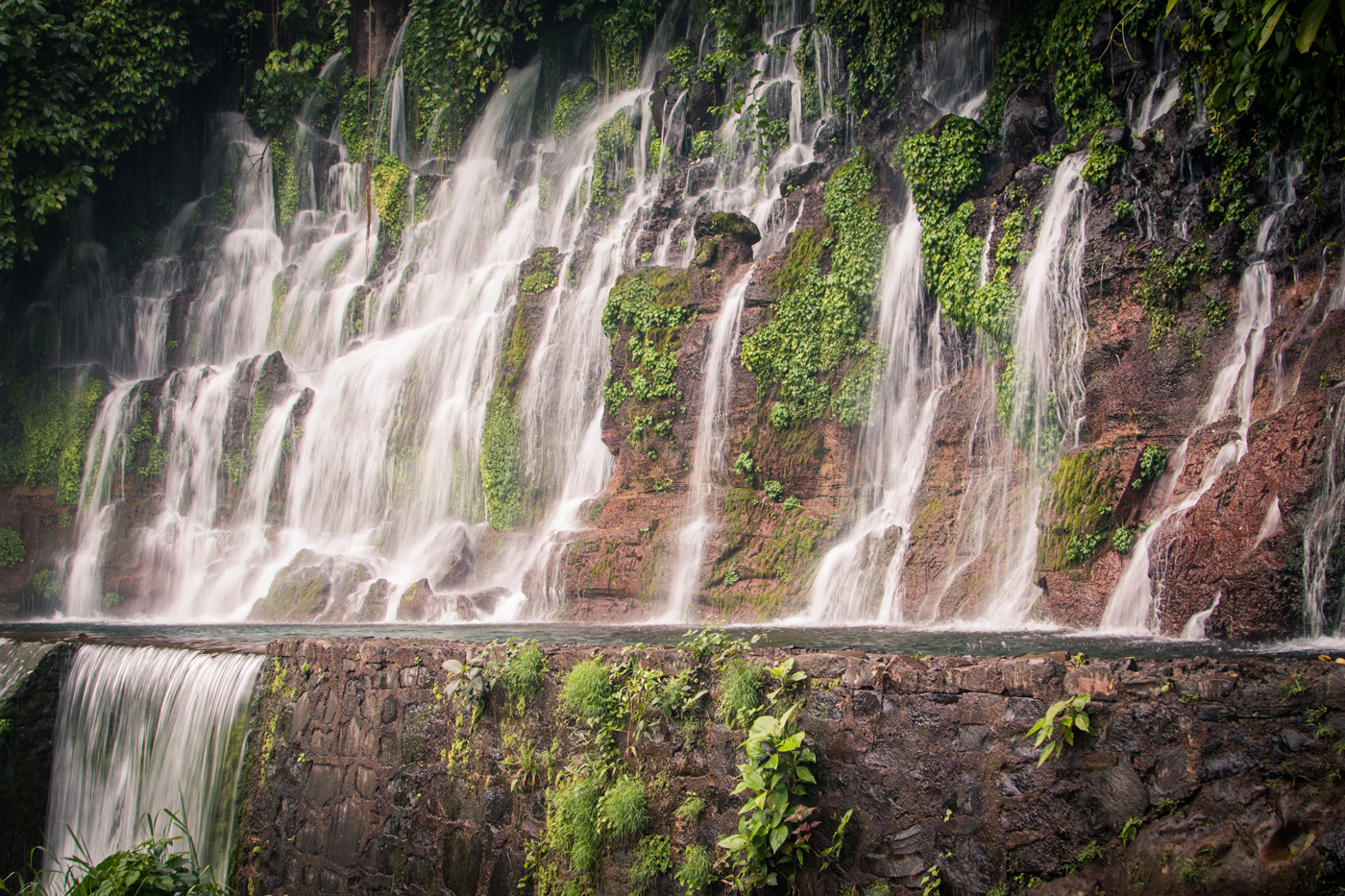 Back on the bus, Apaneca was the next stop along the route and was a small and even quieter town with just a few small cobblestone streets. We briefly explored on foot before finding another bus onwards to Ataco, which turned out to be our favourite of the three. And with a name like that why wouldn’t it be! It was a friendly and welcoming town with locals more than happy to greet you in the streets. Many buildings featured colourful painted murals on their walls and the rest were painted in the typical, bright pastel colours we had grown used to seeing in colonial towns. 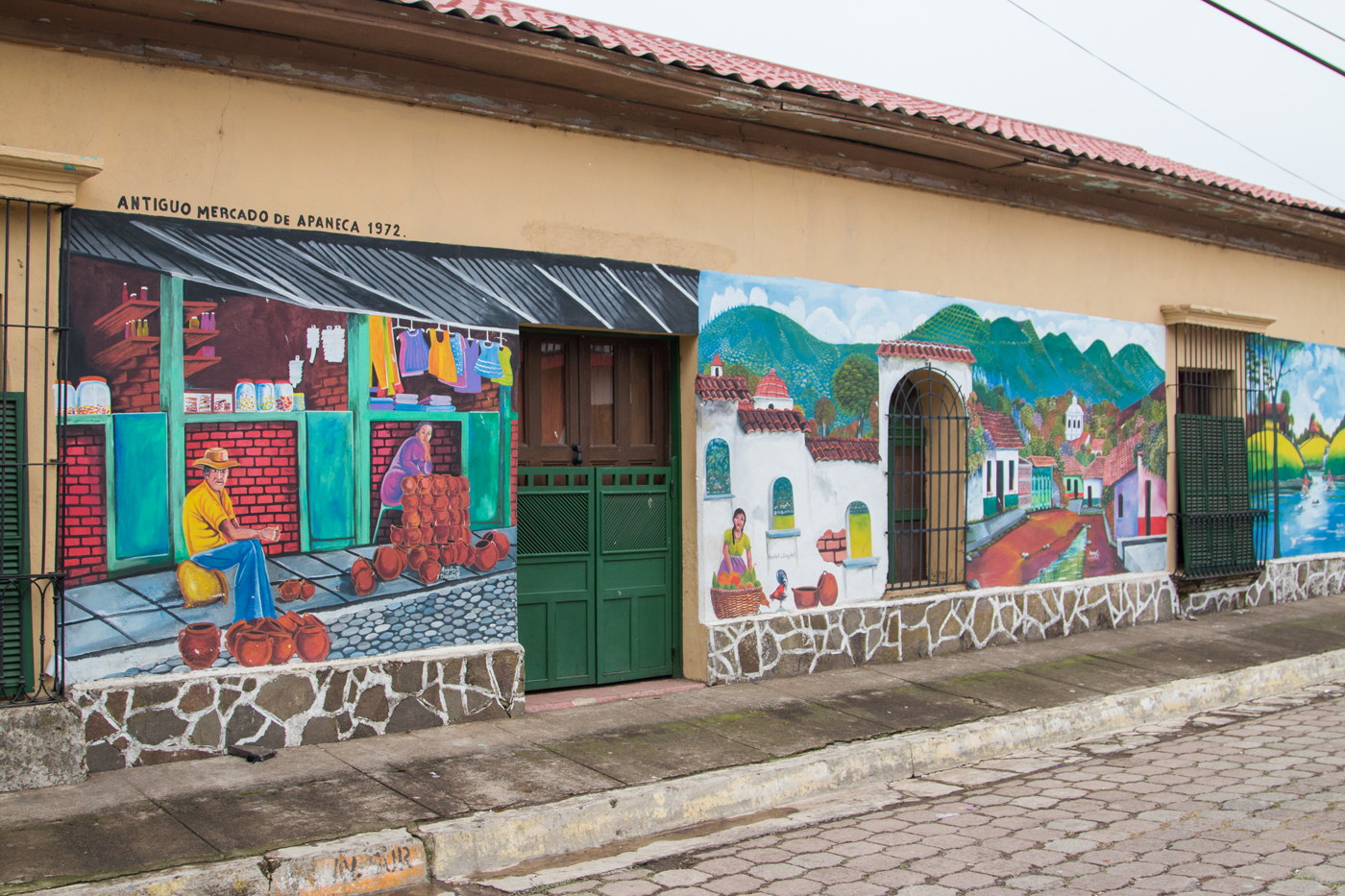 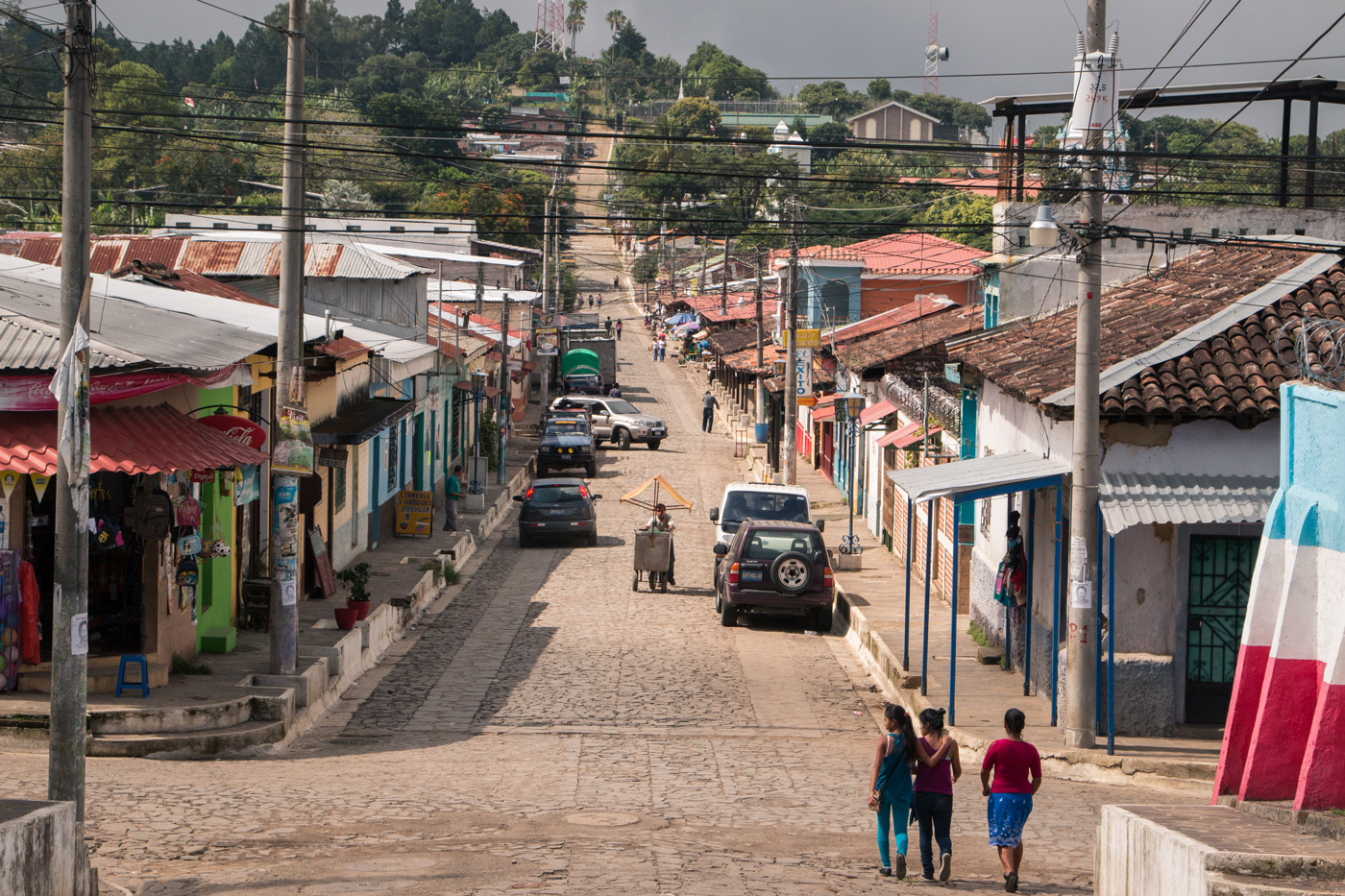 We stopped for lunch before taking the advice of the staff and climbing the steep neighbourhood hills to a lookout at the top of town. The hot walk was worth it as it offered a great view to the colourful streets below. To finish the day, we looked around the local markets before heading back to Santa Ana on one of the last buses late that afternoon. 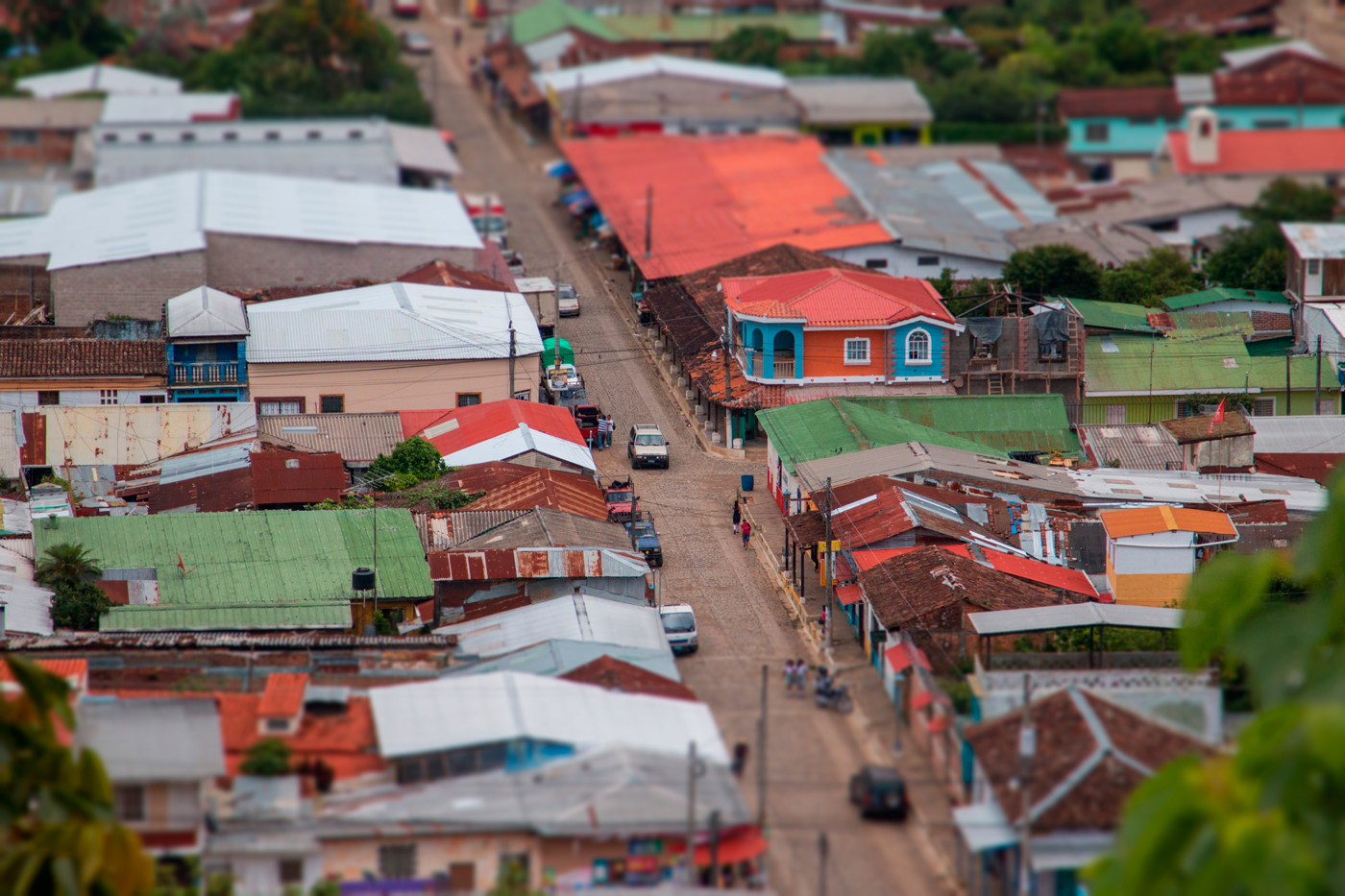 By all reports the capital city, San Salvador, was one to avoid. Regarded as one of the most dangerous cities in the world, thanks to its uncomfortably high murder rate, it wasn’t a place we had planned to spend much time in. The public bus network however meant that we had to make a few brief stops to change buses and make our way to another terminal on the other side of the city. Besides the now familiar strange looks in our direction it was thankfully incident free and we were on our last bus of three for the day heading to Suchitoto.

Suchitoto is another small colonial town of Spanish influence. Its cobblestone streets overlook the Suchitlán lake and it is a popular weekend destination for Salvadorans. We were here for just one night before our long day of travel the following day and spent our afternoon in town exploring the area before ordering as many varieties of pupusas we could find for dinner.

Thanks to Lauren’s cut-throat, and often embarrassing, negotiation skills we landed a cheap private room directly overlooking the lake. 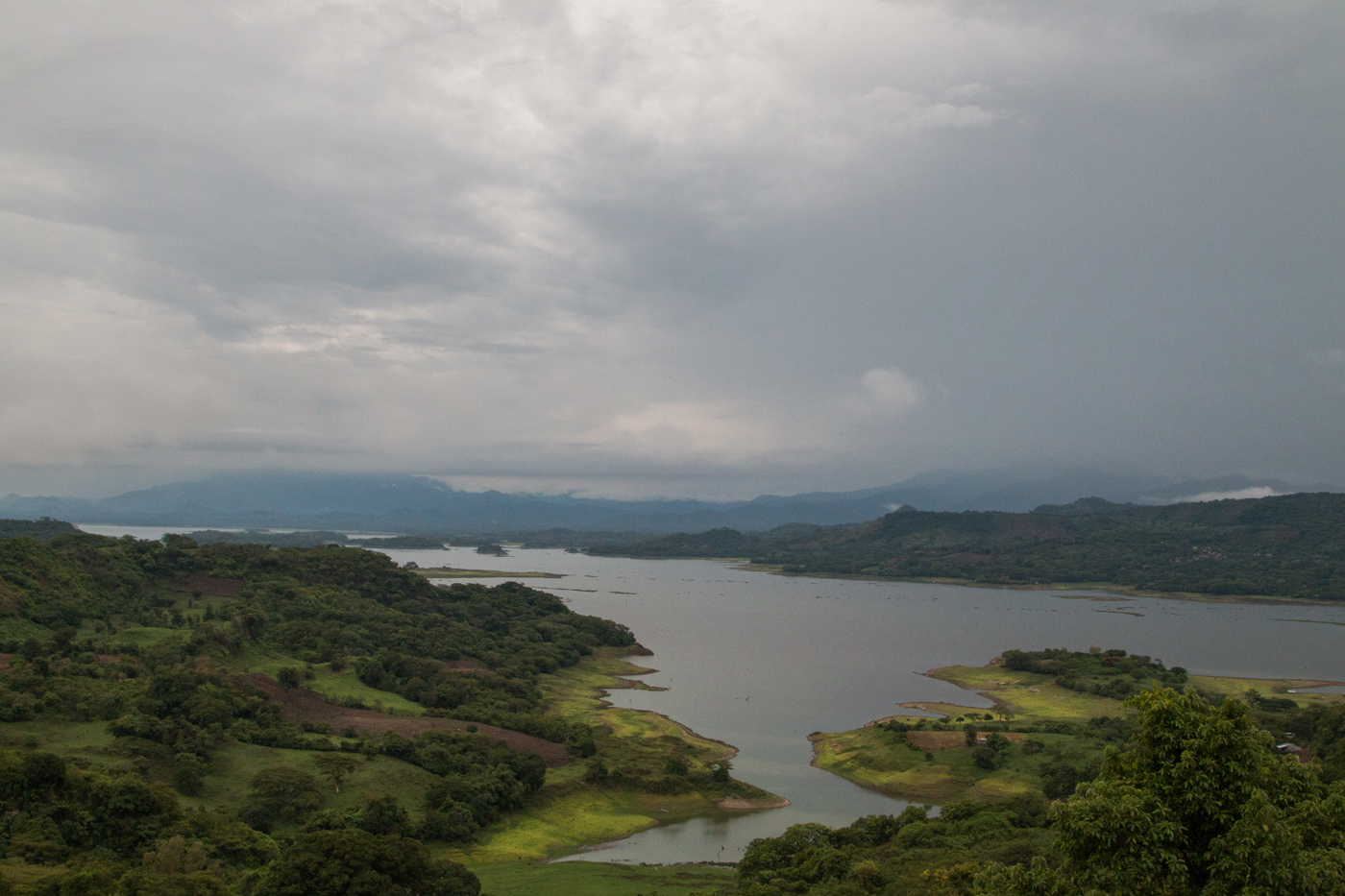 Suchitlán lake from our bedroom window

One of the pinnacles of my Spanish skills to date was finally getting a Spanish dog in the hostel to sit! I’m learning the important stuff..

The next morning we had an early taxi (4am) to make it to San Salvador in time for our long bus through Honduras and onto our next stop Leon, Nicaragua.