We opted to fly from Colombia into Ecuador, favouring the 1hr 40m flight into the capital, Quito, over the ~30hr bus alternative. Being right on the equator I had expected, perhaps naively, that Ecuador would be hot and humid. However, Quito is the highest official capital city in the world, sitting at 2,850m above sea level and there was snow on the tops of the mountains. I had been wearing thongs or barefeet, shorts, tshirts or singlets pretty much everyday for almost 6 months and now all of a sudden we had to put that stuff away and get out the warm clothes that had been packed away at the bottom of our backpacks.

We joined the free walking tour of Quito the following morning to help us get to know our way around the city. It started with a wander through the markets where we met the local ladies selling exotic fruits and vegetables and purchased a delicious fresh mora (mulberry) and coconut juice. We were then lead through the city by the friendly and knowledgeable local guide learning about its history as we visited its various plazas, churches and the main square.

Looking down to Quito from the mountains

The equator is not far from Quito, marking the middle of the world and the point where after spending the last eight months travelling within the Northern Hemisphere I would be crossing back into the same half of the world as Australia. In 1936 the government built a monument to represent this landmark only for it to be recently revealed, with the help of GPS equipment, that it was built in the wrong spot. To be fair, being 240m off was impressively close given the less accurate measuring instruments of that time. Nevertheless, for the nearby property, and actual location of the equator, this was a gift dropped in their lap and they capitalised on this by turning the property into a tourist attraction. This real Mitad del Mundo (Middle of the world) has set up various exhibitions to demonstrate the effects of the equator along with several 0º 0’ 0’’ signs throughout complete with a “calculated with GPS” line below in what might be a subtle dig at the government’s gaffe. A worker emptied a tub of water on one side of the equator and it swirled in a clockwise direction and, just like an episode of the Simpsons, the same tub was emptied a few metres on the other side in the opposite hemisphere and it swirled anticlockwise. Water emptied right on the line dropped without any swirl. Other experiments demonstrated the impacts of balance and gravity on the equator as well as explained the Earth’s equatorial bulge, meaning the Earth is wider at its centre leaving the summit of Ecuador’s highest mountain technically higher (or further) from Earth than that of Mt Everest. We spent the afternoon taking photos and, like any normal person would do, jumping back and forth between hemispheres. 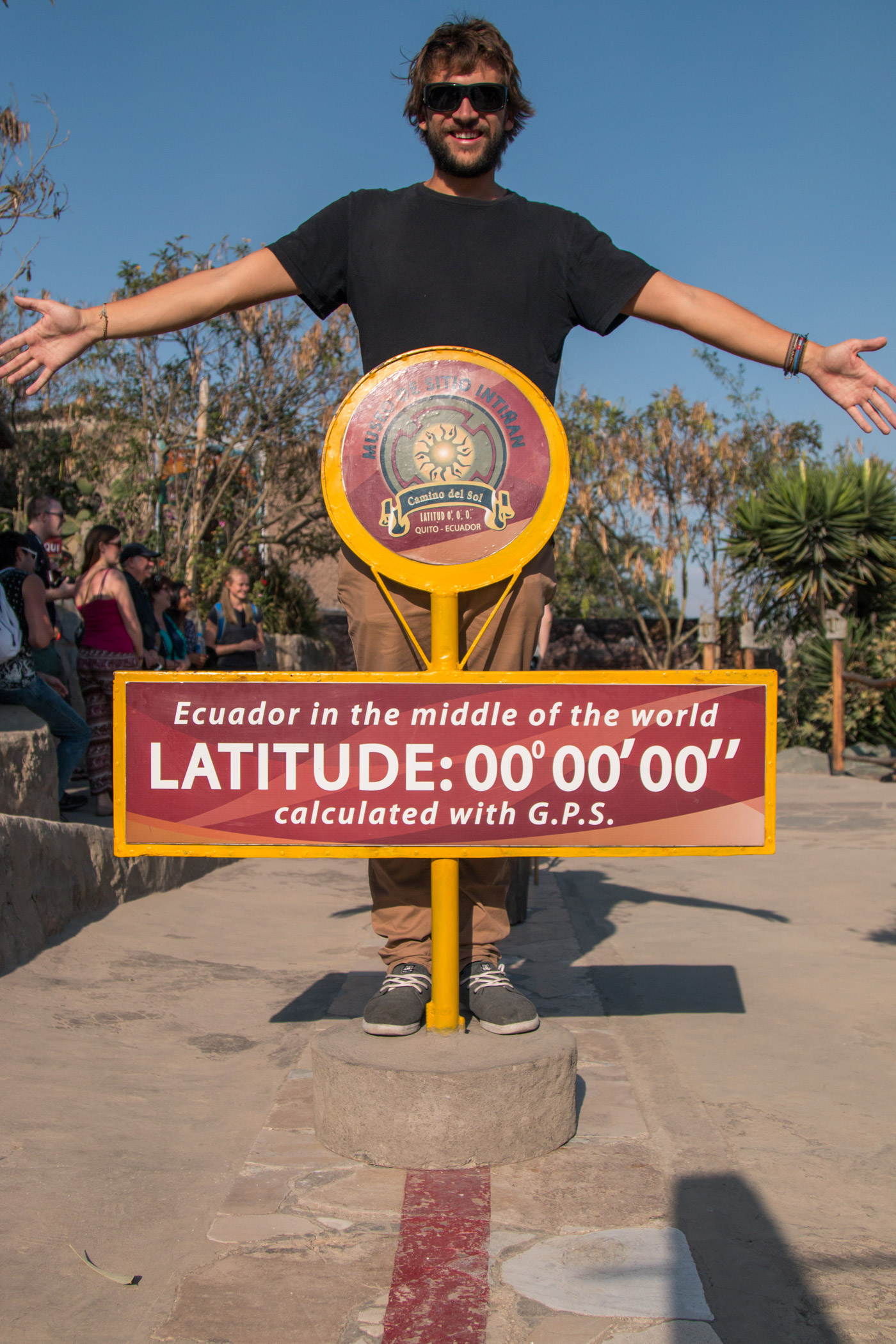 Standing in both the Northern and Southern Hemisphere. Latitude 0º 0' 0''

Ecuador is located on the infamous Ring of Fire where a large number of earthquakes and volcanic eruptions occur. Cotopaxi volcano is located just south of Quito and is considered the highest active volcano in the world. Visible from much of the city on a clear day we were surprised to learn that in April this year it began to show signs of unrest and came back to life. A major eruption of ash and steam occurred as recently as August and for the whole time we were in the area it was sending smoke into the air.

We got out of the city for the day and took a trip to Laguna De Quilotoa, a huge volcano crater lake. At a height of near 4,000m at the rim, the altitude made the weather cold and windy. However, as we descended the sandy path towards the lake surface the temperature heated up dramatically making for a much longer and difficult walk back out. 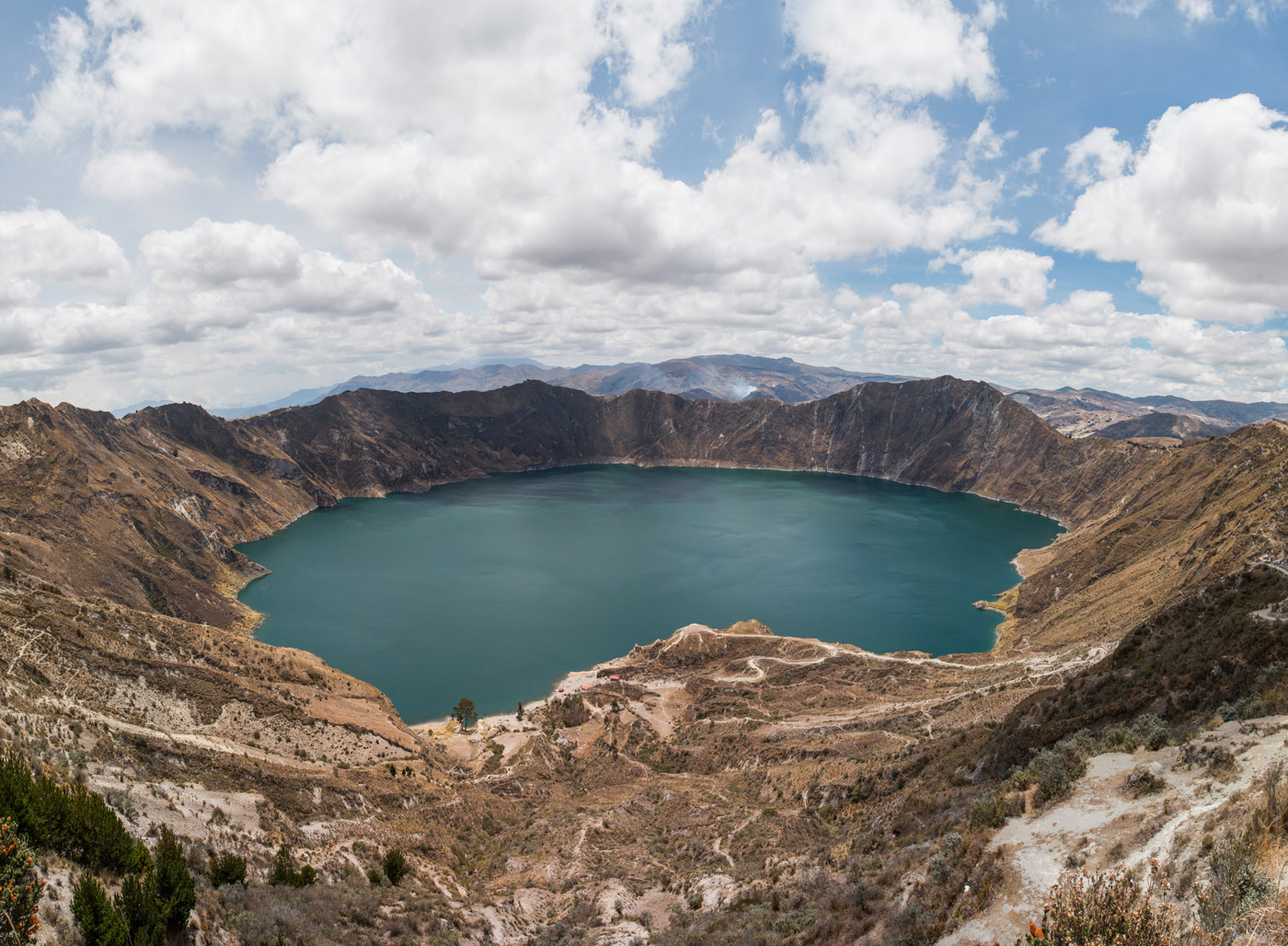 Late one afternoon we rode the Telefériqo cable car, lifting us high into the mountains for a great view overlooking the city and the highest point of the trip so far at 4,100m. This put into perspective just how big the city of Quito is, home to 2.7 million people and extending as far as the eye can see in every direction.

The Galápagos Islands was so amazing it deserved its own post!

Back on the mainland after our time in the Galápagos we landed in Quito to spend the night before making our way to a town in the mountains called Baños. Amusingly, its name translates to “bathroom” or “toilet”, and being the childless yet dad-joke wielding comedian that I am I found it difficult to let this go unnoticed. Far from a shitty place to visit, instead we found a friendly and welcoming town quite different to Quito. It was surrounded by farmland, green mountains and flowing waterfalls and offered many quality cafes, bars and restaurants.

One of the most popular activities in Baños is the Ruta de las Cascadas (The waterfall route) consisting of almost a dozen waterfalls set out over a 17km stretch of road and commonly seen by hiring mountain bikes and riding between them at your own pace, stopping for photos along the way. We set off riding in the morning with a map and plans to follow the road passing the many waterfalls and tunnels to one of the largest waterfalls in the area, Pailon del Diablo. Along the way we also stopped to ride in one of the many worrying home-made cable cars locals have set up along the route to carry people high across the gorge in front of the waterfall to get a closer look.

After a long day of bike riding, that night was the perfect opportunity to soak our sore muscles with the locals in one of the many hot springs. Located below a waterfall the pools are fed by hot water heated by volcanic activity deep below the Earth’s surface. The pools are a popular social activity for locals, especially at night, and we moved within the multiple pools testing the varying temperatures from freezing cold to scalding hot.

Ecuador’s hallmark candy is Melcocha (taffy) and the majority of it is made in Baños from the local sugar cane. It comes in all sorts of colours and fruity flavours with my favourites being guanabana and mora. It can be seen being made in store fronts throughout the town with large quantities being pulled, stretched and beaten against sturdy door frames by the shopkeepers to obtain the right consistency.

With a spare afternoon we hired a buggy to explore both the town and surrounds, following winding roads along clifftops without guard rails and stopping to look down at the rivers and waterfalls far below. I drove manically around the town speeding up for speedhumps and taking advantage of any patch of dirt I could find. The highlight though was Lauren announcing:

"I'm turning the GoPro off, it encourages you to be silly" 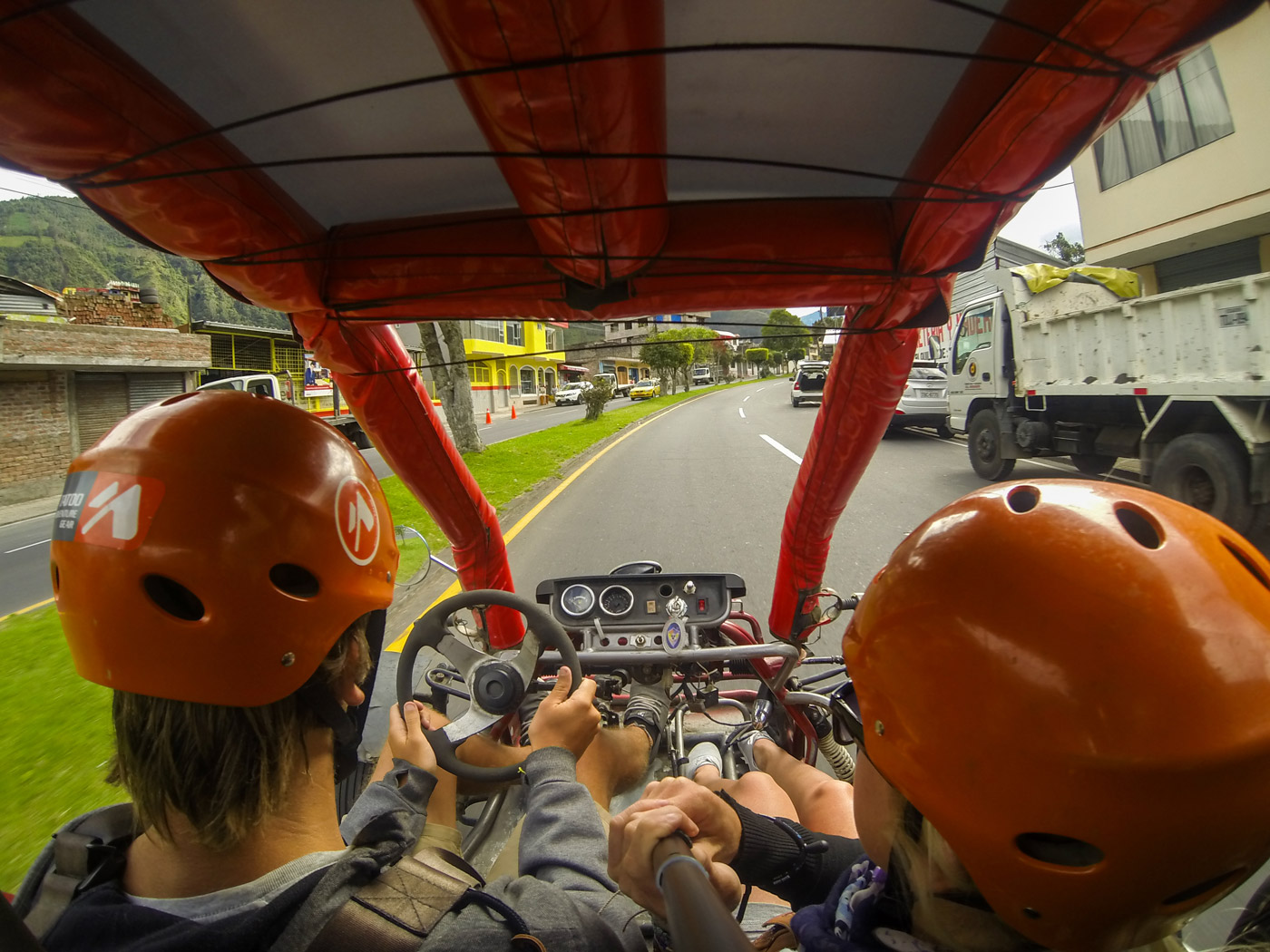 Exploring the town by buggy

With plenty of scenic views around Baños we took the hostel owners suggestion and followed his basic map up a steep bush path for an hour to reach a lookout over the town. Not ready to turn back we continued uphill in hope of reaching La Casa Del Arbol, and its famous swing perfectly positioned for photos high in the mountains. Without much of an idea where to go we followed the road until meeting a farmer working at the front of his property. With so-so Spanish we asked how to get there on foot and were dishearteningly told it was a further 2.5 hours walk by road. Instead he pointed to a shortcut by way of a rugged bush track and said that it would be much quicker.

We had heard of a property that had only recently built a much more extreme swing on the side of a cliff and decided to try and find that along the way. We followed the track and with the help of some more farmers managed to find the property. We were excited yet horrified at the sight of this huge swing perched on the edge of a cliff overlooking bush and farmland hundreds of metres below. Another couple watching on informed us they had changed their minds and pulled out which meant we had no one to watch beforehand. Thankfully, the owner chose Lauren to go first, fitting her into a harness and whisking her out onto the platform despite her pleas for a safety briefing first. Lauren’s squeal overpowered my laughter as the platform dropped and she was sent racing out over the valley. I was up next and after surviving the initial swing out I enjoyed having my legs dangle freely as I swung back and forth high above the ground. Surprisingly we didn’t pay until we were safely back on land which is a terrible business model had we of slipped off.. Even then it only cost us $5 each which led me to wonder just how much of their setup costs had been allocated towards safety and testing.

Tired of walking, we asked the owner if she could drive us the rest of the way to La Casa Del Arbol. We spent the rest of the afternoon on the much tamer, but more known, swing admiring the views overlooking Baños and posing for photos. 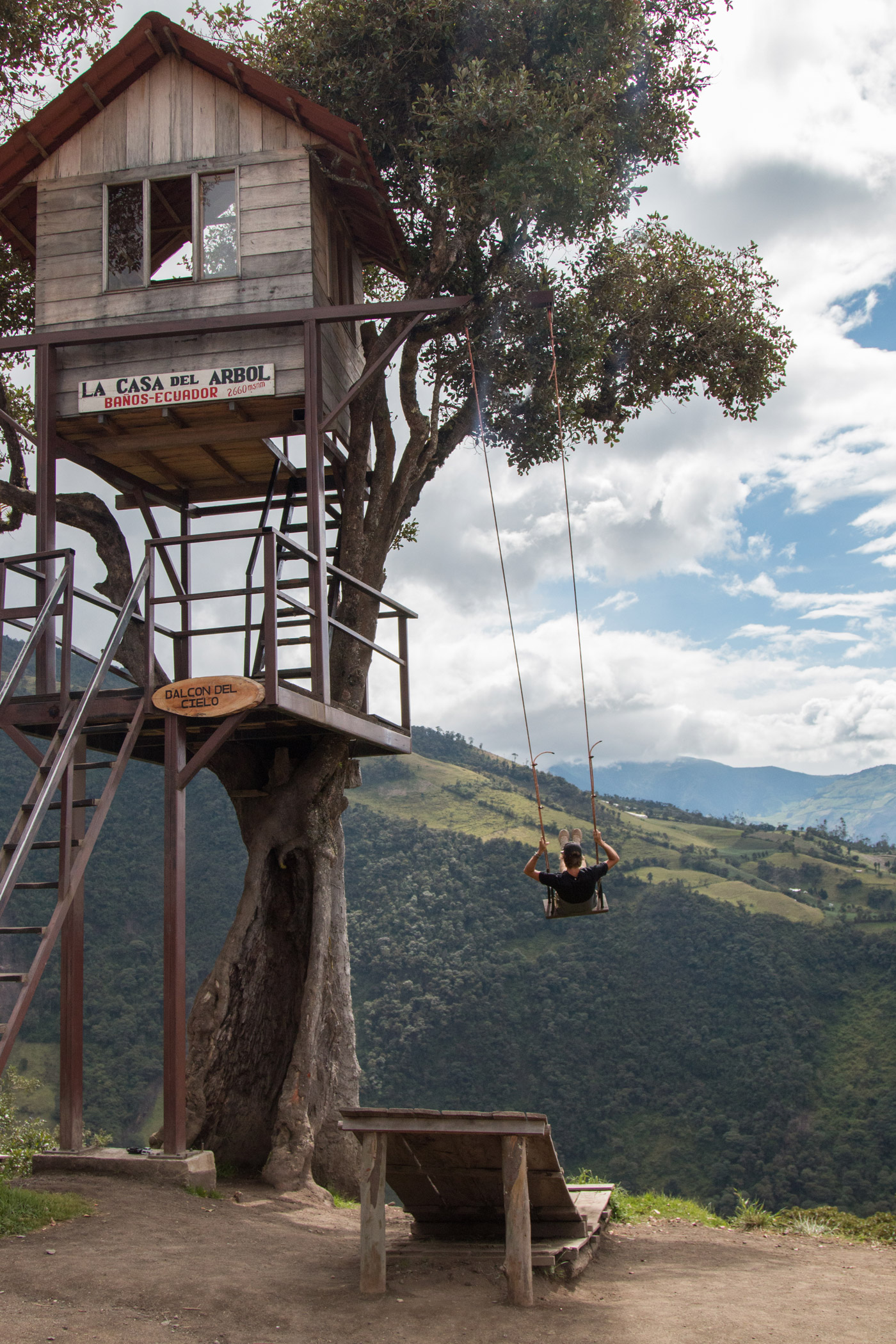 La Casa Del Arbol, playing on the 'swing at the edge of the world'

Our last stop in Ecuador was Montañita, a popular party town on the pacific coast. By day the beach is filled with sunbeds for hire and small carts selling ceviche and freshly squeezed juice. After the sun goes down the town transforms with the nightlife centred around “cocktail alley” a pedestrian street lined with stalls selling cheap cocktails from 10 to 20 page menus filled with any cocktail or mixed drink you could imagine. The streets are flooded with people out to party as the stalls pump music all night competing for customers. At night we hopped between stalls, ordering many different drinks and meeting others on the chairs provided by each stall.

We left Montañita late one afternoon to catch an overnight bus across the border and into Peru. If there is to be one positive about reaching a border crossing at 2am and having to sleepily get out and go through border control it’s that there are no crowds. It ended up being one of the quickest borders so far with the exiting Ecuador and entering Peru desks right next to each other with no bag checks or even questions.