"Welcome to paradise. You made it!"

…was the first thing we heard as we left immigration in San Pedro, Belize and were greeted by some happy locals. It had been a long, sweaty boat ride from Chetemal, Mexico across into Belize and was such a relief to just drop our bags at our accommodation and jump straight into the Caribbean Sea just ten steps away and in time to watch the sunset.

Our first stop was San Pedro, a town on the southern part of the island of Ambergris Caye. Belize is a former British colony, member of the Commonwealth and is the only country in Central America whose official language is English, which was very helpful to us given our below average Spanish skills.

On our first full day we found a lift up north and spent most of the day floating around in inner tubes and playing giant jenga at Palapa Bar, drinks in hand. 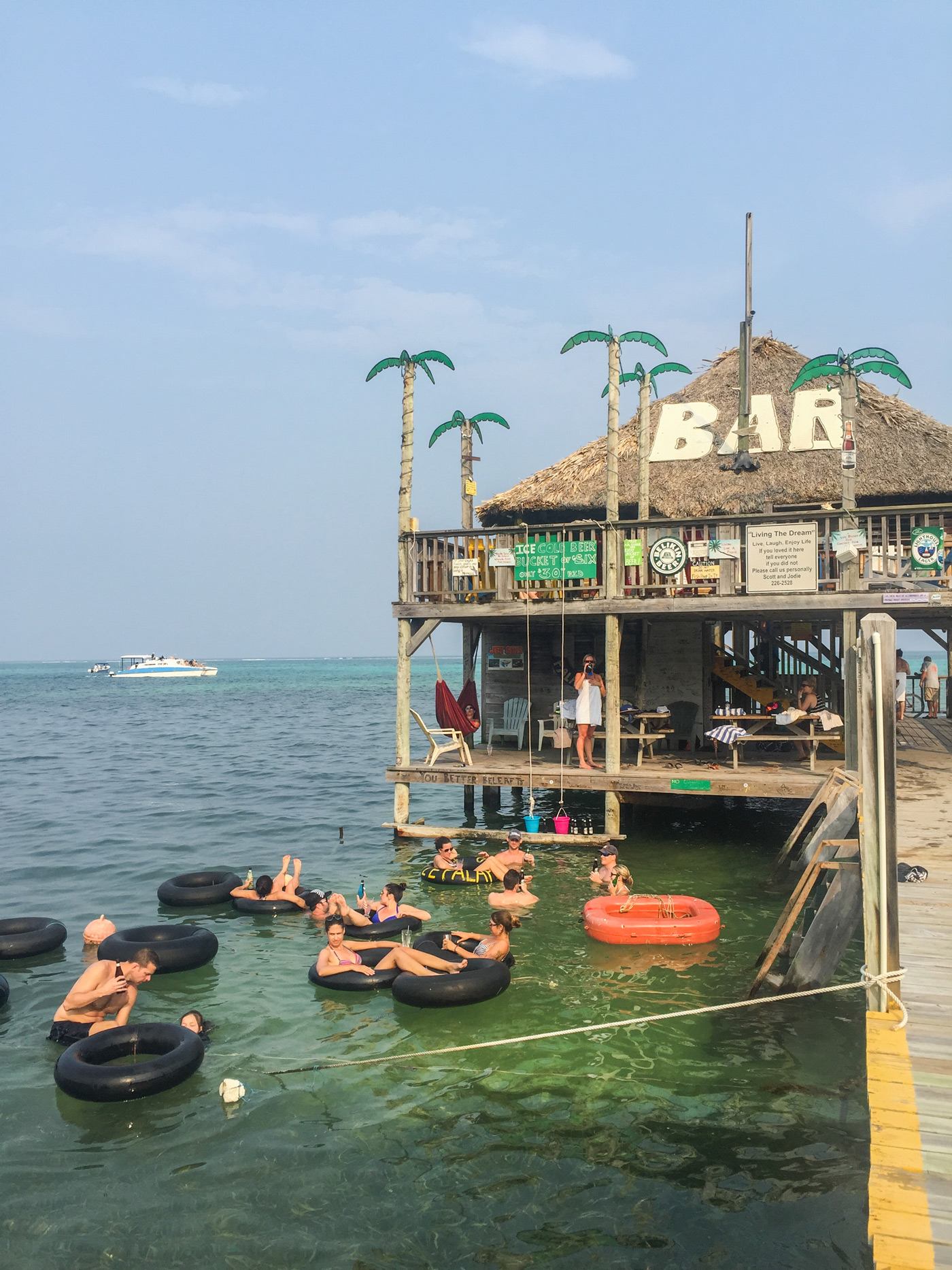 After betting on a game in Cuba that involves cruelly spinning a guinea pig around, we continued our awkward animal betting games and joined in on the famous Chicken Drop at Wahoos Lounge. It basically involves betting on numbers from a 100 grid and waiting for the chicken to shit on your number. I was “fortunate” enough to be selected to prep the chicken and had to wave it around in the air and blow air up its bum before putting it in the ring. Neither of us were winners in the three rounds we entered but it was an experience.

Lauren and I rented a golf cart, the most popular mode of transport, to explore the island. We took turns behind the wheel and drove right to the southern end as well as venturing up north. It was mostly sand and dirt roads, bumps and potholes. Perfect for doing slides until I almost lost Lauren out the side of the cart. It was great having the freedom to explore on our own and we stopped many times along the way for some good photo opportunities and to have a swim off a wharf. 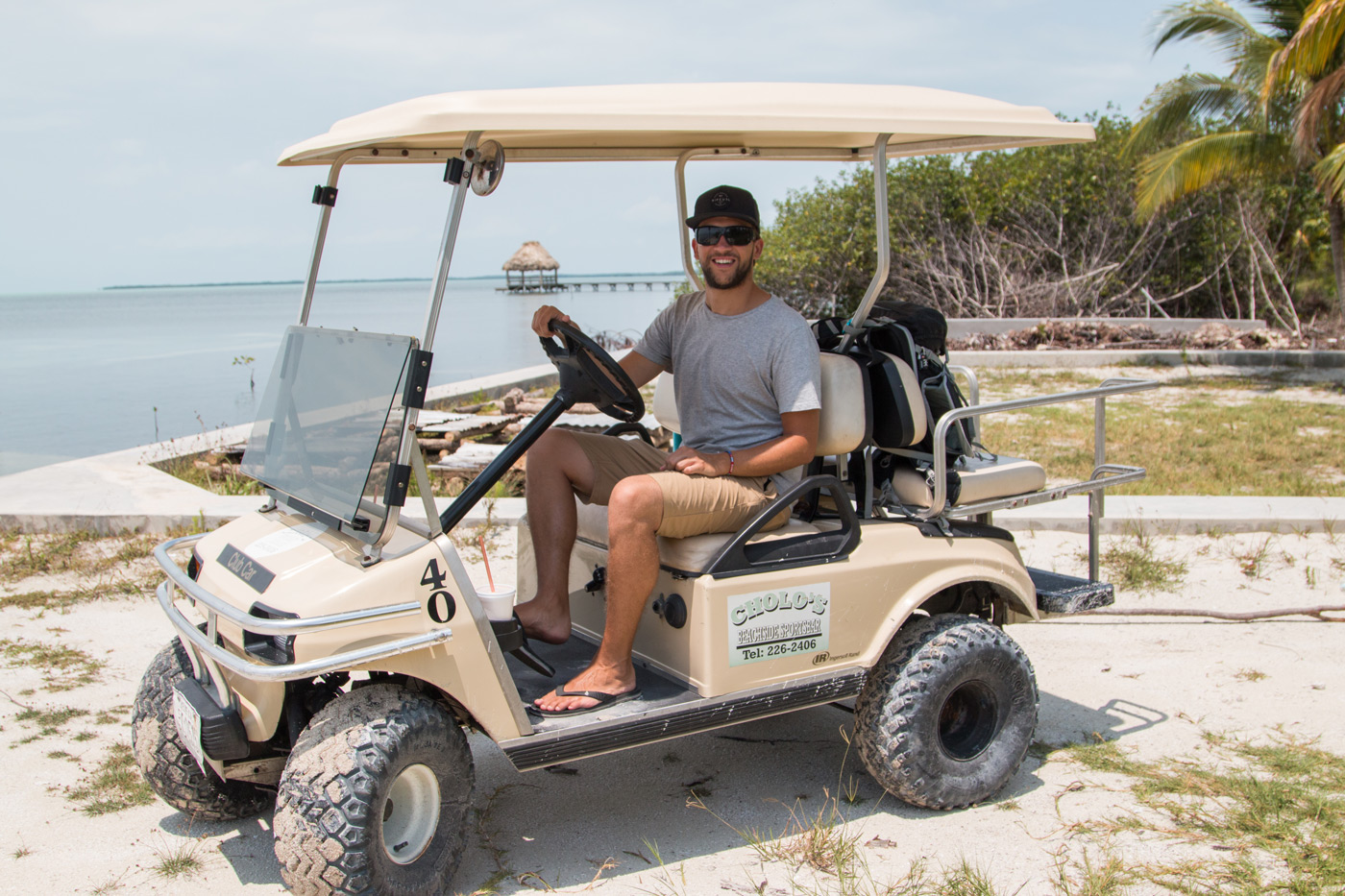 Exploring in our golf cart

After a few days it was time to move on and we took a short 45 minute boat ride over to Caye Caulker, a sleepy island with the motto “Go Slow” which perfectly described island life. We explored the main street, a sandy strip filled mostly with pedestrians and bikes and one of only three main roads on the island, and found a bar called Lazy Lizard on the split between the North and South island. It is very popular and has the best spot on the island for swimming, relaxing, drinking and watching the sun set over the water. We ended up visiting daily during our week long stay, enjoying many Caribbean rums in the sun. 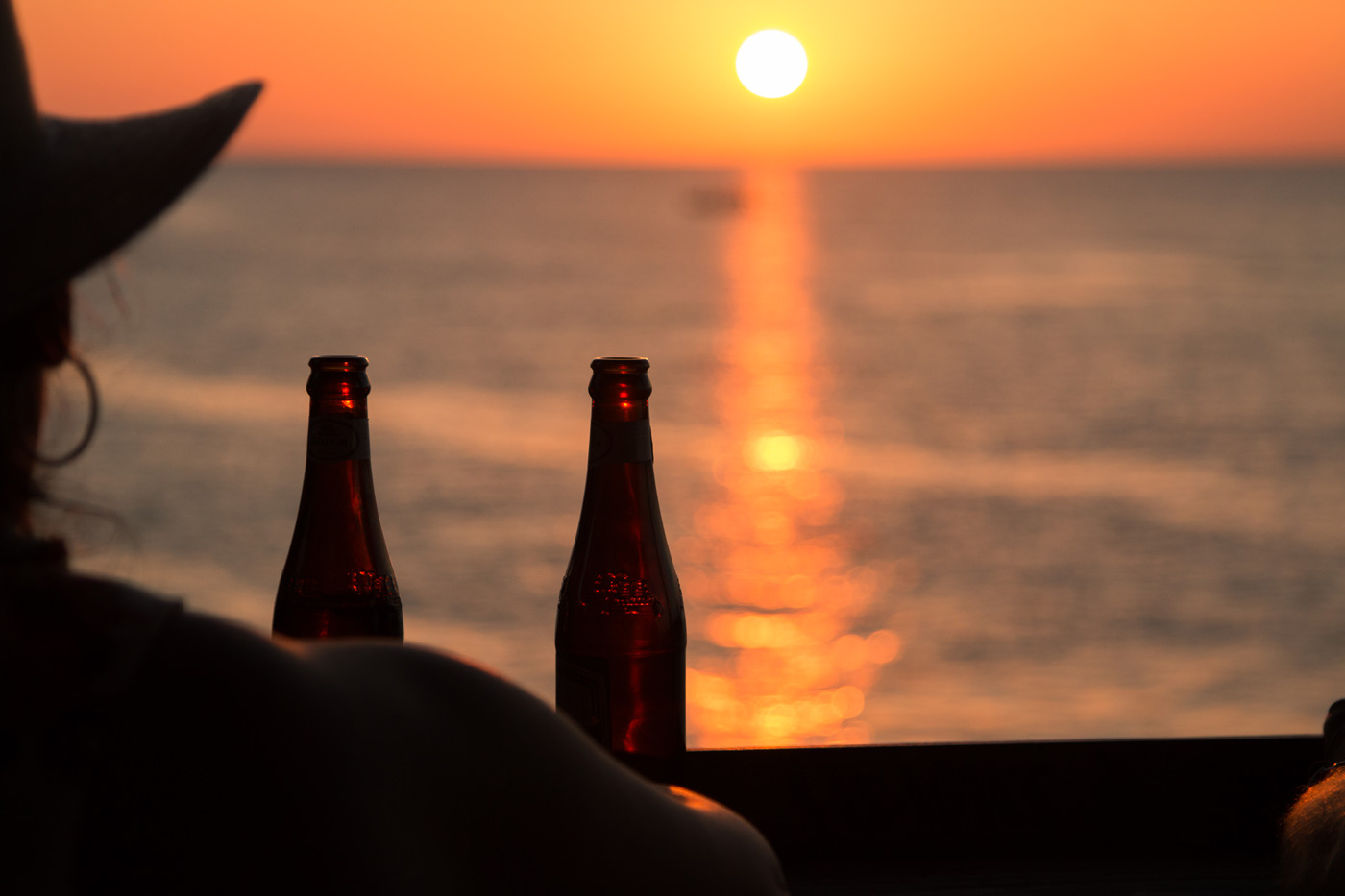 With the island being so small, the best way to explore was by bike, and even so we had covered the whole place easily in an hour. We parked and swam multiple times and stopped for lunch on the bar deck overlooking the water. Riding around made it easy to find many cheap local restaurants we could come back and try, including one we had breakfast at a few days later for $6.50BZ ($4 AUD) for the two of us.

Lazy Lizard at the split

We booked into a full day sailing trip to take us out snorkelling at the Northern Channel, Shark Ray Alley, and Hol Chan Marine Reserve. Our group was small, at six including us, and our two local guides were friendly, entertaining and knowledgeable. They came out snorkelling and dove down with me to point out different coral and wildlife. We saw thousands of tropical fish, large spotted eagle rays, stingrays, grey nurse sharks, eels, a lobster, and a turtle! They also kept us well fed with a large seafood lunch as well as shrimp ceviche and bottomless rum punches that afternoon as we sailed back to land sitting on the deck at sunset. Later that night as Lauren passed out laying across the bed at 8pm and without dinner, we learned that rum punches are her weakness. 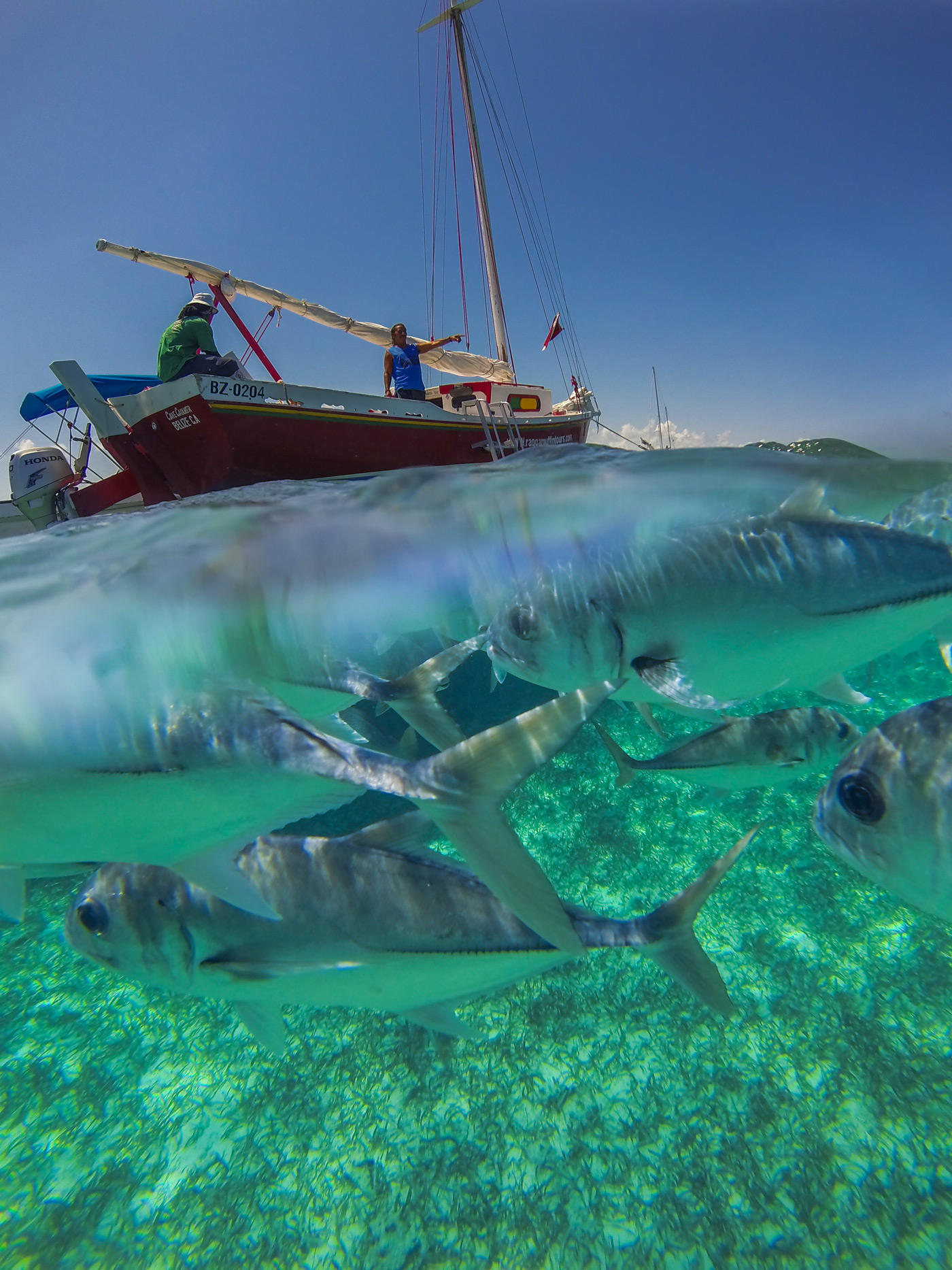 Our day trip boat shot from the water 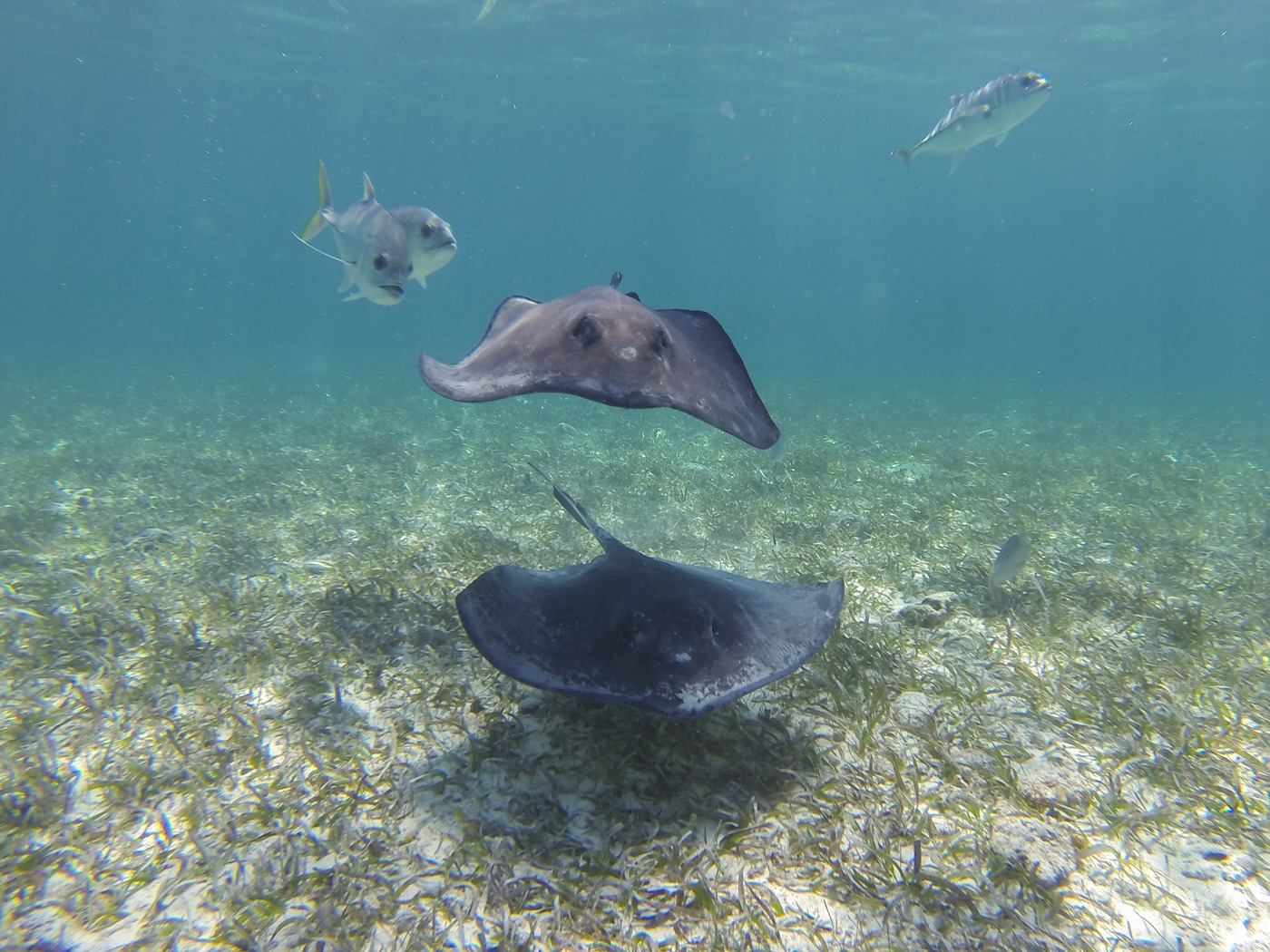 Island life is tough, and we spent the next morning laying around in hammocks over the water alternating between reading, eating and napping. We moved to the water for the afternoon and floated around swimming until dinner. A very tiring day.

After a week relaxing on Caye Caulker we made our way to Placencia. This time transport would be by catamaran on a three day sailing trip through the Caribbean. We had sixteen people in our group from all around the world plus three crew who looked after us very well. All food and alcohol was included on the trip and Jerry, Marvin and Charles ensured we never went hungry with quality meals and constant snacks. Between the many snorkelling and swimming stops we fished off the back of the boat, and when stopped we swapped the rod for a spear-gun and followed Marvin into the water so he could teach us. Anything caught became lunch or dinner and it was amazing to experience seafood so fresh. In the case of the conch ceviche, I was deep underwater watching when the shell was picked from the ocean floor. We also watched on as a fish was reeled in and cut up to be eaten as sashimi mere seconds after leaving the water.

At night we camped on tiny islands consisting mostly of sand, palm trees and clear, starry skies. The first being Rendezvous Caye, an island so small that no one permanently lives there. We set up our tents just before sunset and then jumped back in the water to cool off, surrounded by warm, clear tropical water in every direction. We had a feast for dinner and sat drinking rum well into the night. As stories and laughter got louder, the only things being kept awake were the fish. Our second night was Tobacco Caye, home to a small community of no more than 20-30 people. Each morning we got up and jumped straight in the sea to freshen up and cool off in what was already ~25ºC at 7am. 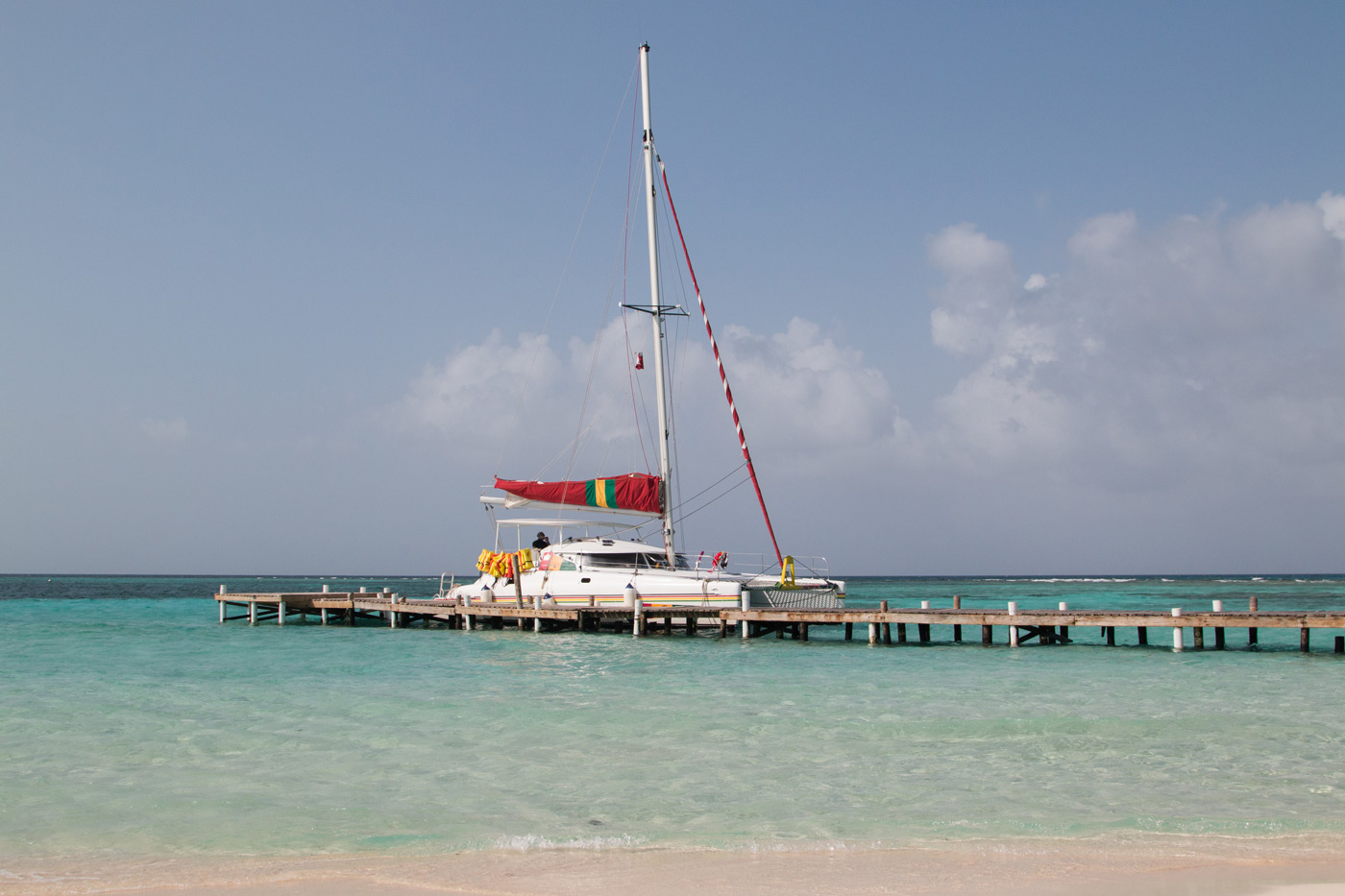 When the boat was moving and you weren’t fishing the group would be scattered around laying on the deck in the sun and chatting. Even though it was just a short trip you got the chance to get to know everyone living in close quarters and being together from first thing in the morning until going to bed.

Pulling into Placencia it was a shame for the sailing trip to be over and to no longer be island hopping in the Caribbean, but we were also looking forward to a good shower and decent bed (both of which are few and far between in Central America). We all swapped details and met up again later that night for dinner and some drinks. 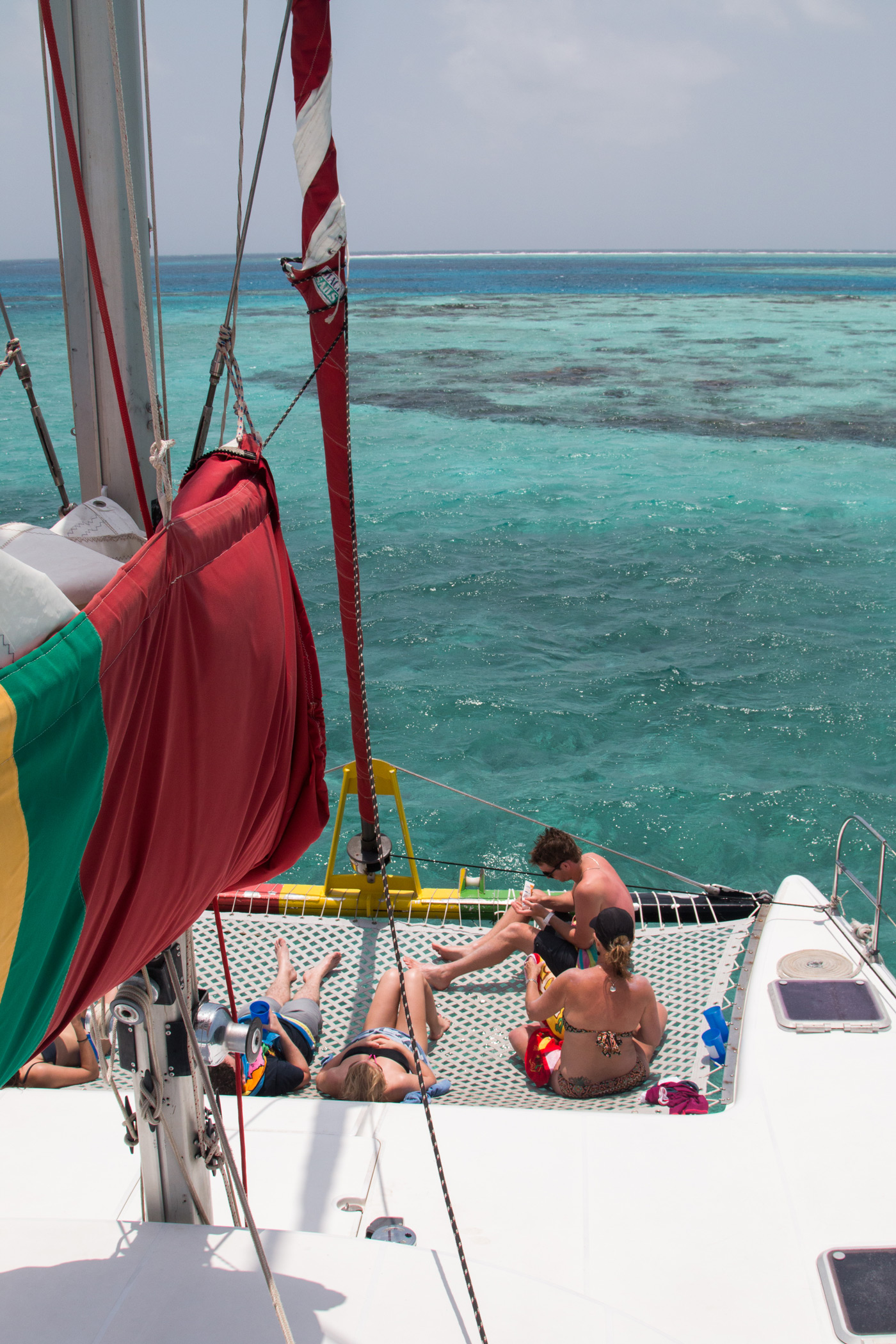 Our first day in Placencia started late with a much needed sleep in after three days sailing in the sun and then consisted of laying about in hammocks reading a book. The following day we caught a local bus North and found a nice local guy to give us a lift 25 minutes into Cockscomb National Park and agreed to pick us back up later in the day. We had started out early to try and avoid some of the heat as we hiked up a very steep trail through the already hot, steamy jungle. Thankfully we were rewarded at the end with a waterfall and swimming hole all to ourselves.

We left the Caribbean coast behind for now and got up early to make our way inland to San Ignacio. The four hour trip was an entertaining experience, sharing a dusty, sweaty ride in two different buses filled with locals. One lady was carrying a large unprotected and decorated birthday cake while another in the next seat from us was carrying at least four live chickens…

We took full advantage of the cheap food inland, joining the locals in many popular spots to score cheap but tasty meals. For breakfast one morning for example we shared 2 burritos, 3 tacos, and a large fresh juice all for <$4 AUD and walked away full.

San Ignacio is home to an iguana sanctuary that supports the local iguana population and helps to educate the community on their survival. We took a visit and were lucky enough to be the only people there. Our guide seemed to have as much fun as we did playing with the babies as they, and us, posed for many photos. 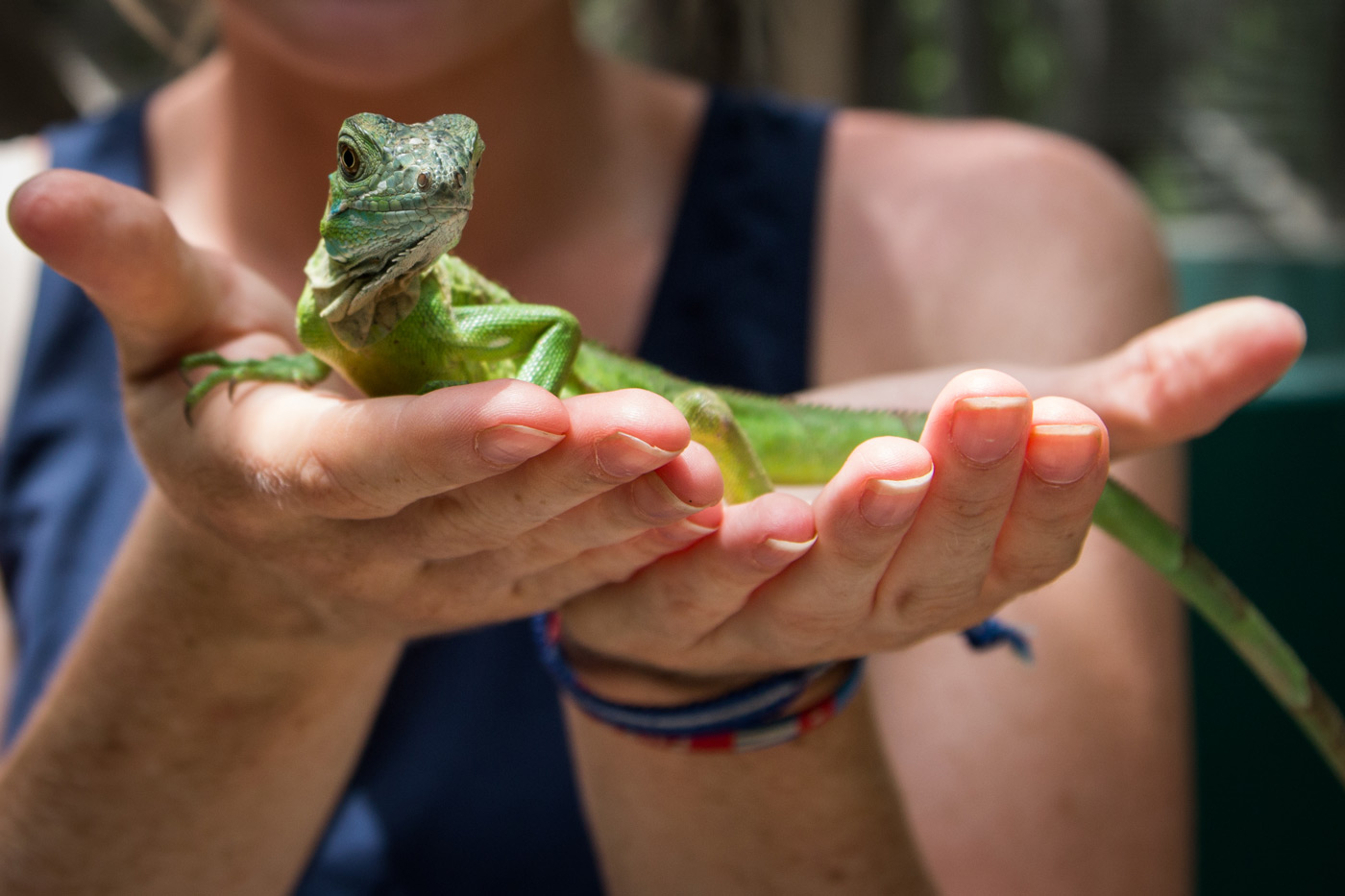 From San Ignacio we made our way to the border and have now crossed into Guatemala where we will stay for at least three weeks.