I got into San Diego, Southern California around 4:30pm after a very short 30 minute stopover in Los Angeles. This was to be my last major stop in the US before I move on and was also one of the destinations I had been most looking forward to. It was no accident that I left this stop to last in attempt visit as close to the warmer months as my schedule would allow.

I was staying in Pacific Beach for a week in a hostel in a great location right on the sand that came recommended by friends back home. I’ve come to notice that the common area can make or break a hostel in terms of the social side and having somewhere to drink and make friends. This place had a large deck out the back that is hard to beat overlooking the whole beach with music playing, chairs and tables, and eskis provided to put your beer in. There was always someone to talk to out there day or night and it was the perfect spot for card games, beer pong, flip cup and any other drinking games anyone could share.

An exciting novelty for me coming from the East coast of Australia is having the sun set over the water. Even though I have seen it several times before on previous visits it never gets old when the sunset looks like this every day. 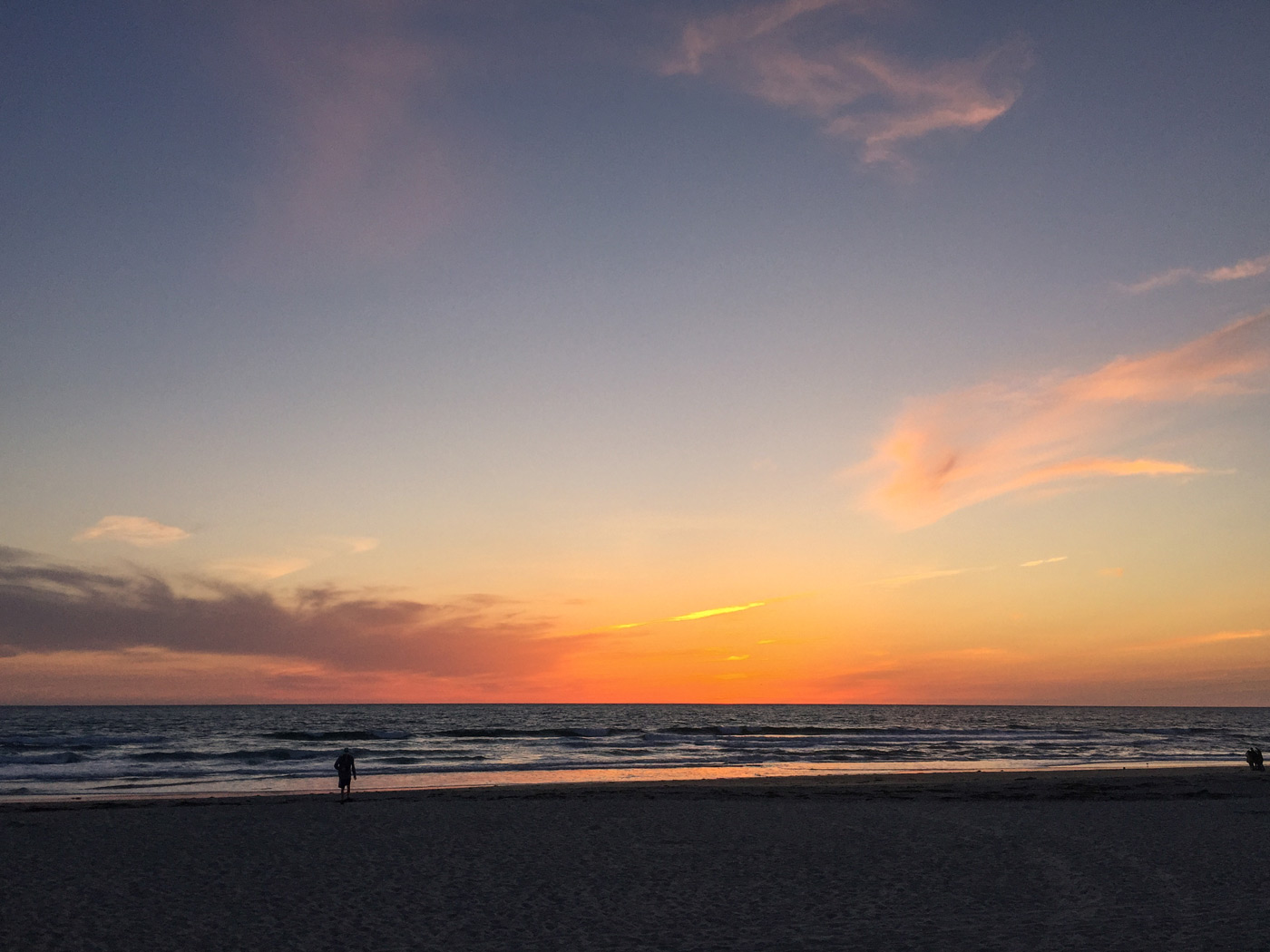 Daily sunset from the hostel deck

On my first full day I took the tip from the local event noticeboard and hired a bike for the day to ride down through Mission Beach and into Ocean Beach for the weekly Wednesday markets. They close off a few of the main streets and have performers, fresh food and other stalls with surf art, clothing and accessories. It is quite a long ride but an easy one along the beach boardwalk with many other people doing the same thing either on foot, rollerblades or, like me, a cruiser bike.

To continue my streak of luck and perfect timing this trip the Giants happened to be playing the San Diego Padres in their home season opener and I managed to secure a ticket for a great seat on opening day! I’m so glad it worked out as opening day proved to be an amazing event with a sellout crowd of 45,100 and great atmosphere. They closed off the streets around the stadium before the game and had music, shows, performers, food and alcohol tents. The start of the game was even more American and patriotic than usual with fireworks, military parachuting in, a giant sheet flag carried by soldiers, fighter jets flying over head and the unveiling of their impressive new HD replay screen. I managed to get talking and joking to all the guys around me after I stood out as one of the only ones cheering and clapping on Giants plays. It was a close game that went to extra innings with the Giants winning in the end.

A few of us from the hostel decided to head to downtown San Diego to have a look around and find the historical Gaslamp District to have a few drinks. First we stopped by the USS Midway Museum, which is aboard one of America’s longest serving aircraft carriers. It features a self-guided audio tour through the many different areas of the ship as well as many aircraft on display on the flight deck. We grabbed lunch afterwards and I managed to order the most American meal I could find, bacon wrapped chicken wings, which as expected were unhealthy yet amazing. That night we all took the hostel organised party bus back downtown to check out a newly opened niteclub, PARQ.

After a late night I spent the next day laying on the beach in the sun. Despite it being 25-30ºC outside the water at this time of year is freezing. It was nice and refreshing but you couldn’t spend long in there in just boardshorts.

San Diego is much more familiar with tourists than some of the other places I have visited but that’s not say they are completely immune to stupid comments. I had a girl in the surf shop say to me that she thought Australia and Austria were the same thing…

On my final full day in San Diego I hired a bike once again and headed north from Pacific Beach. What started out as a casual cruise ended up being a 20km round trip on a bike with no gears but I managed to see a lot more of the coastline and find some much quieter beaches with clear water and rocks covered in seals laying in the sun. The fancy and expensive suburb of La Jolla lies to the north and riding through it was not hard to miss. It is home to the highest average house prices in the whole of the US with extravagant mansions filling every street. The car dealerships lining the street included Bentley, Lamborghini, Ferrari and Rolls Royce and some of the people walking around looked like they had come straight from the yacht club. Then there was me, a sweaty unshaven guy on a bike jumping off the gutters and getting the tyres to squeal skidding down the steep hills.. 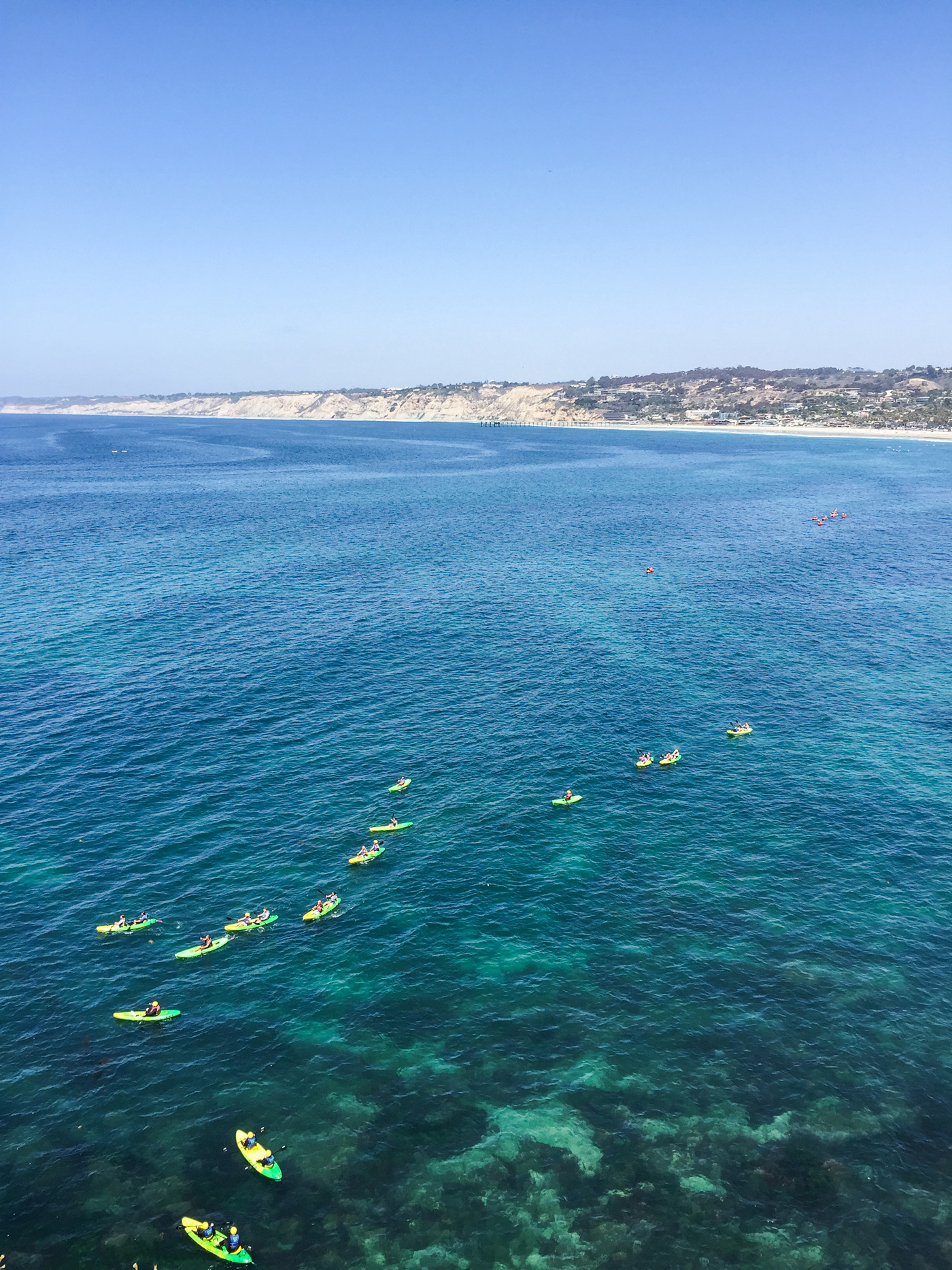 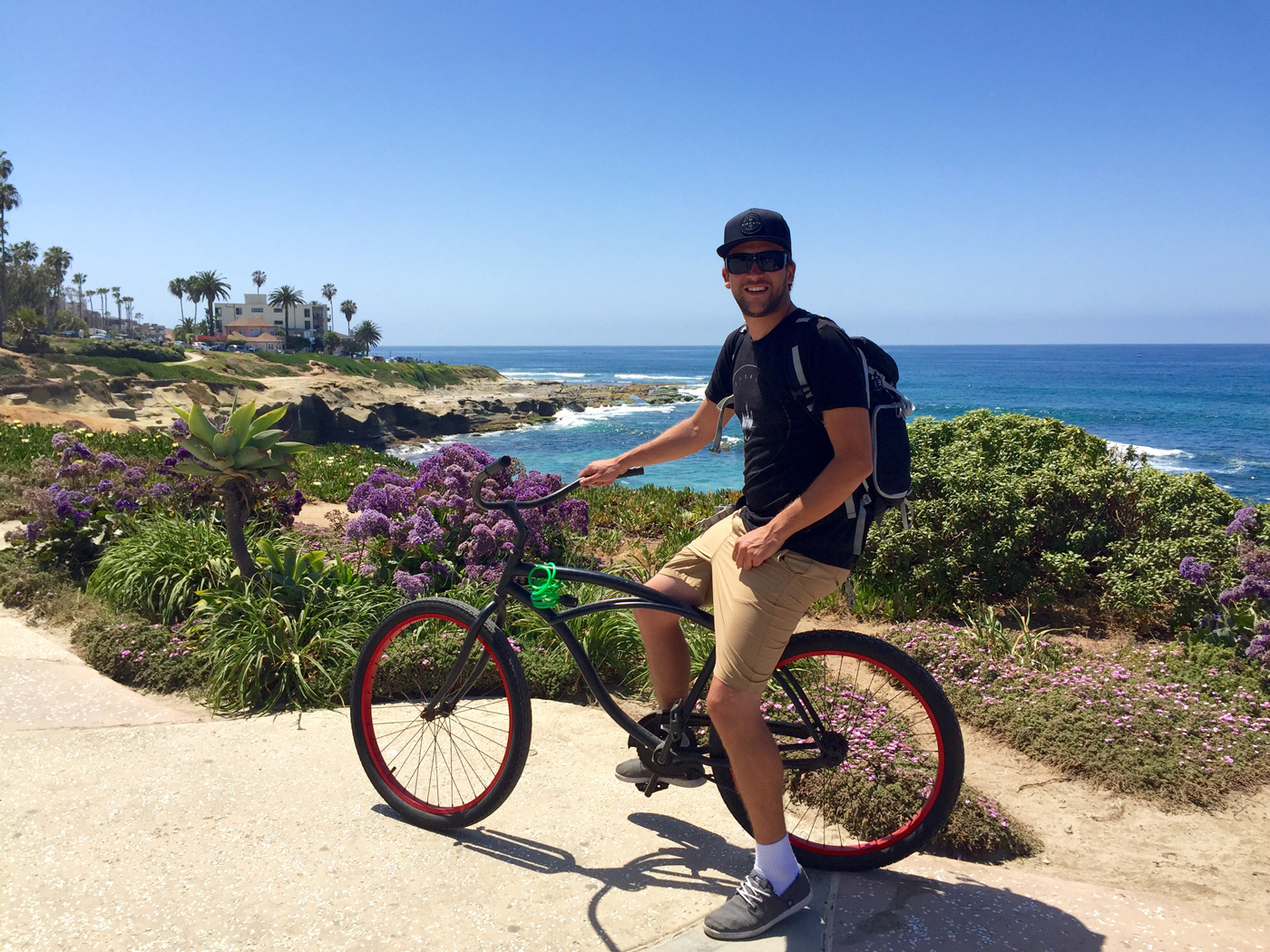 With a flight out of LA in a couple of days I made my way up the coast to stay in Huntington Beach in Orange County. I had stopped here for lunch briefly once before on a roadtrip and wanted to come back to see it properly. It is a fairly small surfy town that is well known for its beach culture, large concrete pier and international surfing competitions such as the US Open of Surfing. It is nicknamed Surf City and even has a surfing walk of fame down the main street. I arrived on a Tuesday which also happened to be the day of their weekly afternoon/night markets where they close off the street and have live music, food, and stalls. Other than bars, shopping and the beach there isn’t much else to do in Huntington and given I was backpacking with limited bag space shopping was out of the question so I spent my days at the beach and nights in the bars. Today on my last morning I took an Uber down to nearby Newport Beach to have a walk around for a couple of hours. 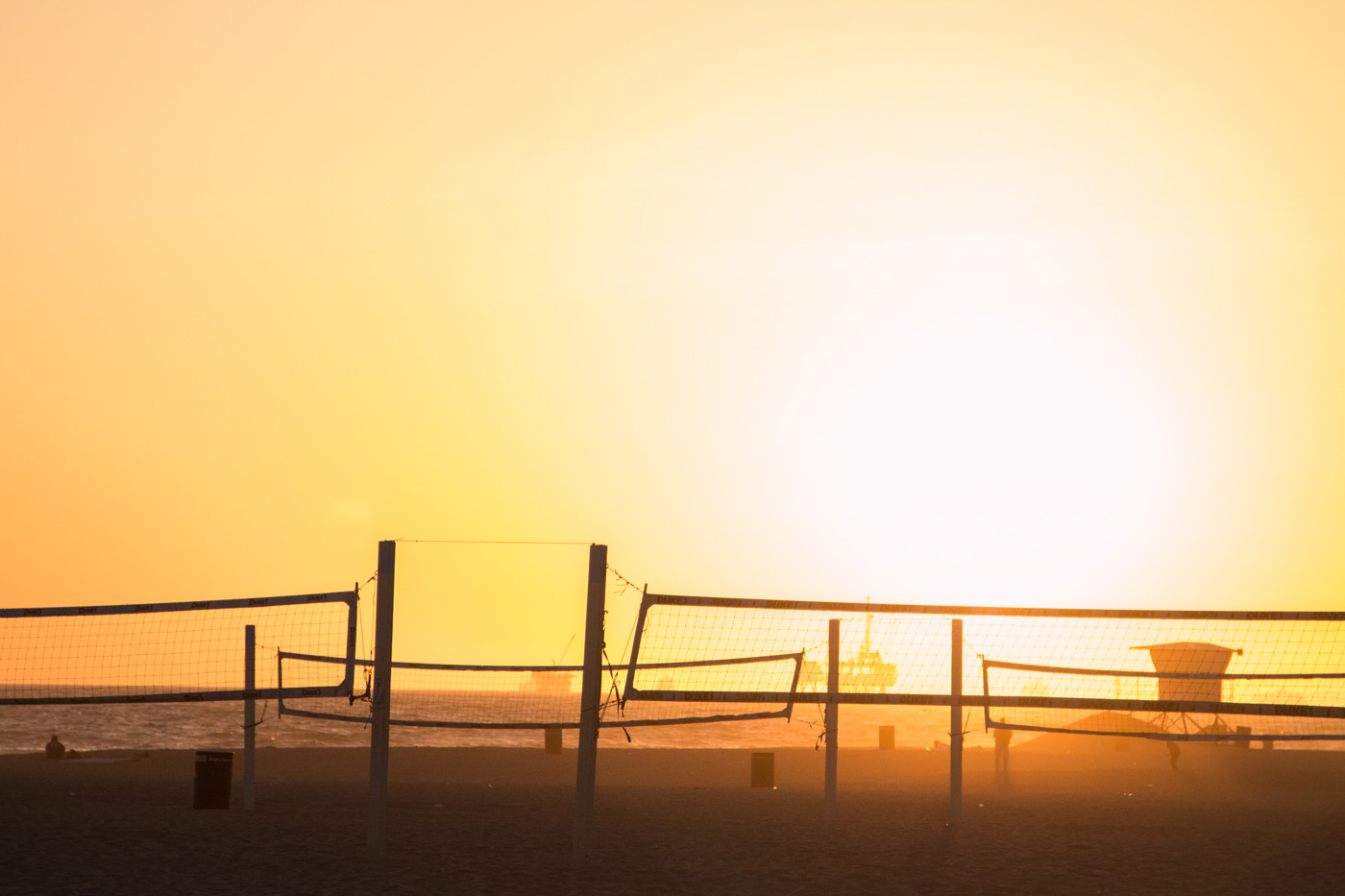 Volleyball at sunset in Huntington Beach 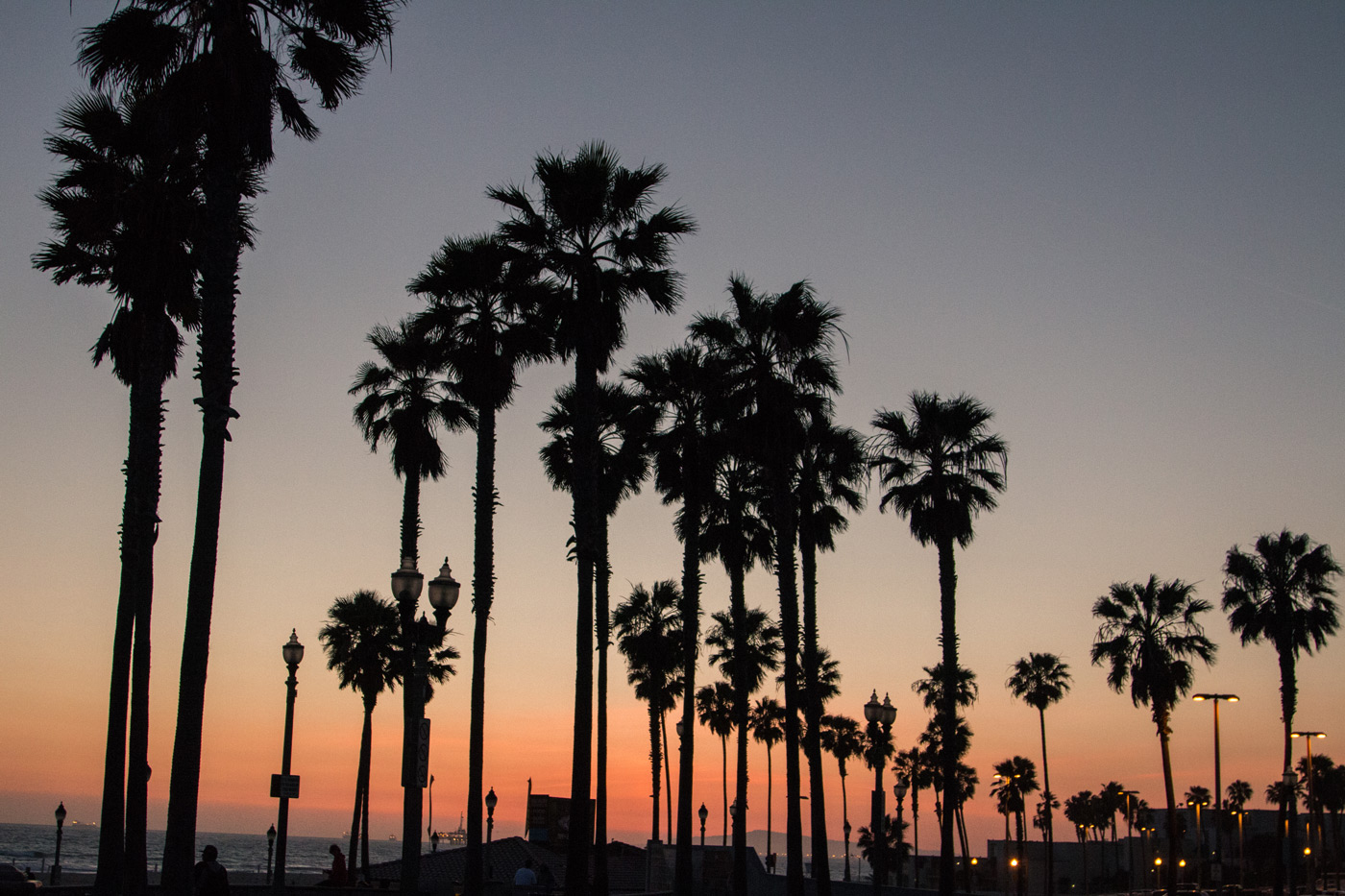 I got a lift to LAX with the same driver that had brought me up from San Diego a few days earlier. Karl from Hostel Hopper is enthusiastic and knowledgeable and this time sitting in the front seat and with me able to talk to anyone we got to have a good chat. Due to their schedule I was at the airport a good 7 hours before my flight and Karl insisted that I take the opportunity to do the last main Californian attraction and walk back out of the airport and down the road to In-N-Out Burger and order from their “secret menu”. As stupid and awkward as I felt ordering a “Double-double animal style with whole grilled onions” the girl behind the counter didn’t flinch and put the order in. I’m not sure the food was worth the 3.5km roundtrip walk with all my bags strapped to my back and front but it definitely killed some time.

After visiting 19 different airports so far since Christmas I am now at the end of my US portion of the trip. It has gone fast and I’m sad to be leaving but the trip is far from over as I now head to two more airports on my way to Cuba! Thanks to the United States’ “relationship” with Cuba I have to fly to Mexico City first, collect my bags and leave the airport only to walk back in and check in as a new customer and airline to fly on to Cuba. A small hurdle in what should be an amazing and eye opening experience.